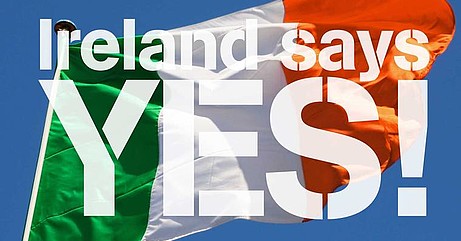 On May 22nd 2016, Ireland became the first nation in the world to legalize same-sex marriage by popular referendum. The vote in favour was 62%, amazingly high considering Ireland’s reputation as a conservative, Catholic nation. The 'yes' vote had the backing of all major political parties and prominent celebrities.

During the campaign, many 'yes' voters said they wanted to show support for gays in their circle of relatives and friends. The sense that a 'no' vote would perpetuate a denial of rights enjoyed by heterosexuals ignited a fire under Ireland's young people. Thousands working abroad even came home to vote 'yes' from as far away as Canada, the US and Australia. The result has been described as a social revolution. The massive 'yes' vote marks another milestone in Ireland’s journey towards a liberal, secular society

As Irish Times journalist, Una Mullally, put it: "A lot of straight Irish people just wanted to be given the opportunity to show that they were not prejudiced, that they had no issue with people who were gay having their relationships recognized, that they wanted to live in a country where all citizens are valued equally."  The Irish Prime Minister, Enda Kenny said, "With today’s vote we have disclosed who we are. We are a generous, compassionate, bold and joyful people who say 'yes' to inclusion, 'yes' to generosity, 'yes' to love, 'yes' to gay marriage.”

Since the announcement, tributes and congratulations have poured in to Ireland on this historic event from leading politicians from all over the world. Good job, Ireland!